Titles: None
Honorifics: None
Nicknames: None
Age: 20
Height: 6’2"
Weight: 220
Hair: Brown
Eyes: Brown
Skin: Pale
Sexuality: Heterosexual
Distinguishing Features: Small burn scar over left eye.
Physical Description: A tall man of medium build. Roland has the look of a hardened veteran of many conflicts. Most frequently seen in his armor with his shield on his back. when looking at him straight on, his spear sits in line with his spine with the tip looking like a spire coming out of his skull.

Roland grew up the son of a blacksmith but always found himself craving more from life than the family profession. This craving only got stronger after his brother, Weylan, left to start his apprenticeship in the city. After an altercation with his father leaving Roland with a burn over his eye Roland ran from home and started to live on the streets. With only a sword and some food to his name Roland quickly found that he was going to have to fight to survive. One day, after fighting off some brigands to keep his only meal for the day, Roland was found by Rab of the Crimson Oars. Rab took Roland in as a member of the Crimson Oars and taught him the ways of a warrior. While Roland was content fighting during the day and drinking during the night, Rab took to climbing the ranks of the Crimson oars with Roland as his right hand man.

You waste time trying to get people to love you. You’ll end up the most popular dead man in town. 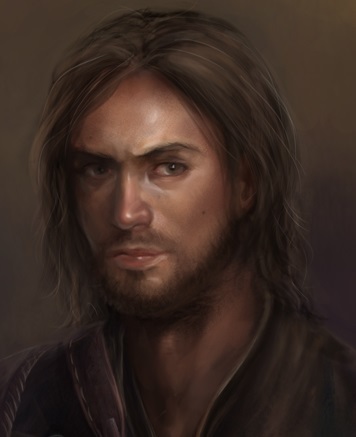